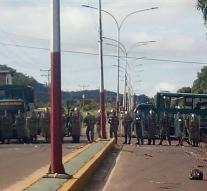 caracas - At a prison robber in Puerto Ayacucho in southern Venezuela, at least 37 detainees have died.

They were killed by security forces who conquered prison, according to the governor of the state of Amazonas.

In the security forces, 14 people would be injured. According to witnesses, it was a 'wild shooter', between prisoners and law enforcement officers. It would have been shot for hours.

It was unrestrained in the prison Puerto Ayacucho, where too few staff would work. In the prisons in the South American country gangs often make the service.