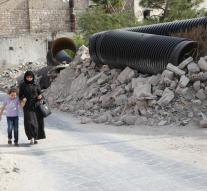 aleppo - 35,000 people have been beaten in recent days on the flight from Aleppo in an attempt to escape the violence that continues to plague the Syrian city . The United Nations are concerned about refugees spend the night in the open now the temperature , especially at night , declining further. " People are in urgent need of food and shelter ," said a spokeswoman for the UN.

The fighting between fighters of the Islamic State and rebels since last week flared up again. Aleppo is in the hands of government forces, but IS on currently spreading in the region. As Russia has in recent days carried out dozens of air strikes on IS.