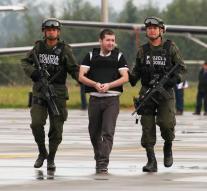 - One of the most important drugs ever criminals from Colombia Monday in the US sentenced to a prison sentence of 35 years for his role in producing and smuggling of hundreds of tons of cocaine. His gang earned a fortune in drug trafficking.

Daniel Barrera, alias El Loco (the madman), was found guilty of several drug-related crimes and money laundering, after the acts had known. he was also Judge Gregory Woods fined $ 10 million.

Woods called the guilty Colombian,, smart, talented and perhaps even gifted man. '' The size of the offenses were, according to Woods,, staggering '. The 48-year-old Barrera said he wants to get the chance again to be released to see his grandchildren. He asked his family for forgiveness.


Barrera was arrested in 2012 after an undercover operation in Venezuela. The USA had 5 million dollars (3.8 million euros) offered for the arrest of Barrera, Colombia 2.7 million dollars.

The network of El Loco sent according to Colombia 10 tons of cocaine a month to Mexico. From there the drugs were smuggled into the United States. Prior to his arrest were 36 members already arrested his gang. Moreover, the authorities five tons of cocaine and 21 aircraft seized.