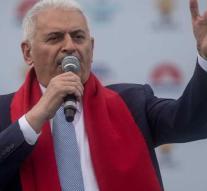 ankara - 30,000 Syrians who have been granted Turkish citizenship are allowed to vote for the Turkish presidential and parliamentary elections on Sunday. That is what Prime Minister Binali Yildirim said on Tuesday, reports the broadcaster NTV.

The government of President Recep Tayyip Erdogan has granted citizenship to thousands of refugees who have fled the conflict in neighboring Syria. Turkey houses about 3.5 million Syrian refugees.