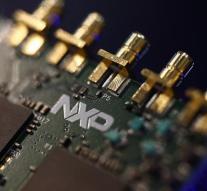 Reported financial news agency Dow Jones. The transaction could be achieved within two to three months. The NXP shares shot up 18%.

The sources also hold a blow to the arm and do not exclude that the negotiations break down. In the chip sector is a consolidation site for two years. therefore producers are trying to be stronger in a market where the trees seemed to grow until recently to heaven.

NXP goes back to VLSI Technology, which was acquired by Philips in 1999. The electronics group from the south pushed off the semiconductor late 2005, but retained a stake of around 20%. Philips sold the company at more than € 6.4 billion in private equity funds KKR, Bain, Silver Lake and AlpInvest. The remaining interest was discarded for about € 350 million in 2010.

NXP has become the largest supplier of chips to the automotive industry. The chips are also used for auxiliary systems for the driver, entertainment and networking among various auto parts.

Besides the auto division, which accounts for about 40% of sales, NXP is also a major player in the market for chips for contactless payment. The chips are also used in public transport, such as the OV-chip card.