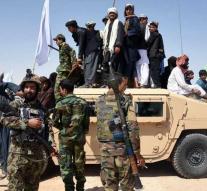 kabul - In an attack by the Taliban in the northwest of Afghanistan, thirty soldiers were killed. This reported the governor of Badghis County, Abdul Qafoor Malikzai. It was the first major attack by the Taliban's Sunni extremists since the end of a three-day file taken in honor of the Muslim festival Eid al-Fitr. The file expired on Sunday.

Dutch minister Stef Blok (Foreign Affairs) has just visited Afghanistan. Dutch soldiers have been active in Afghanistan since 2002. They train and help members of the security apparatus in the northern city of Mazar-e-Sharif.

The Taliban conducted a reign of terror in the country from the mid-1990s until the American invasion of 2001. Since then, they have been attempting to regain power by force.