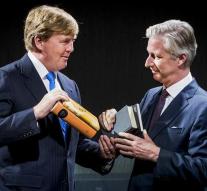 frankfurt - About 275,000 people have visited the Frankfurt Book Fair. That is the same as last year. Netherlands and Flanders were together this 68th edition guest of honor at the international book fair.

The Book Fair, which opened Tuesday and Sunday had its last day, is the largest book fair in the world. There were more than 7,000 exhibitors from about a hundred countries.

Tiziano Perez director of Letterenfonds called the Book Fair a huge success for the Netherlands. He is also very pleased that has been noted that ' we not only books have focused but also on the future of Dutch literature, such as storytelling and literary games. '' He is also pleased with the attention in the German press. According to him, well done to the Dutch literature and ' in its wake, bringing the Dutch art and culture to the fore. '

King Willem-Alexander and his Belgian colleague Philip were last week traveled to Frankfurt for the opening Dutch-Flemish pavilion at the Frankfurt Book Fair.\n  \n  \n   advertisement

Netherlands and Flanders Sunday wore the baton to France, that next year is the 69th edition from 11 to 15 October guest of honor.