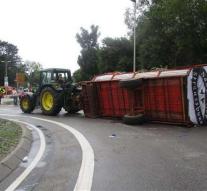 glan - In Germany, 27 youngsters were injured on Saturday when the trailer in which they were seated collapsed. Five are seriously injured, police report.

The accident took place in the village of Glan-Münchweiler in the German state of Rhineland-Palatinate. The trailer was pulled by a tractor and tilted on a roundabout.

The victims have been taken to various hospitals. The help of four trauma helicopters was also called in. The young people are part of a kind of youth movement.