Home / World / 260 guests evacuated for sauna in the hotel 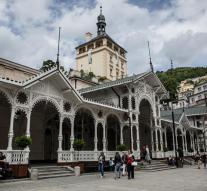 karlsbad - Due to a fire in a spa hotel in the Czech city of Karlovy Vary, 260 guests evacuated on Friday on Friday. According to the fire brigade, the fire was created in the sauna in the basement of the sixteen-story building.

The fire was accompanied by a lot of smoke development. Only after 2.5 hours the fire department had the fire under control. Several people had to be treated with medical attention because they had breathed in smoke. The cause of the fire and the extent of the damage were unknown.

The Thermal Hotel is one of the city's renowned spa resorts in Western Bohemia. The concrete colossus was opened in 1977 and is owned by the state. A few weeks ago, the International Film Festival of Carlsbad took place in the presence of many Hollywood stars.