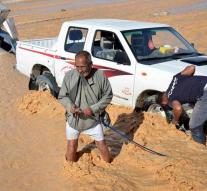 - By floods in Egypt, 26 people lost their lives. That state television announced on its website on behalf of the Ministry of Health. The provinces of Sinai, Red Sea and Suhaj are the most affected by the torrential rains, which started Thursday.

Prime Minister Sherif Ismail spent Saturday visiting Ras Gharib, a town on the Red Sea, to see the damage firsthand. According to an independent local newspaper to try dozens of residents to block his way out of anger over the reluctance of the government in this crisis as a result of the persistent bad weather.