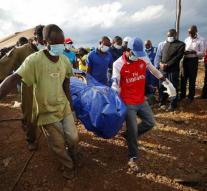 kadoma - Rescue workers in Zimbabwe have reached 24 bodies from two flooded mines. That says Henrietta Rushwaya, the chairman of a trade union for miners. In the place Kadoma walked...

Of the 24 bodies, 23 have now been identified. There would still be dozens of miners underground. On Saturday, nine were saved.

Chief engineer Tapererwa Paswavaviri said earlier that more deaths are being taken into account. This has to do with the occurrence of dangerous gases in the mines.

Many independent miners work in Zimbabwe, often working in unsafe and even officially closed mines.