Home / World / 23 people away from the Red Cross for misconduct 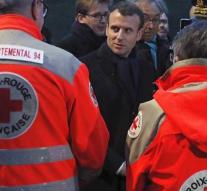 geneva - Over the last few years, 23 people have been fired or left at the International Red Cross (ICRC) because of (the suspicion of) prostitution visits. The Red Cross allows all employees to sign a code of conduct. This states, among other things, that paying for sex is forbidden. Also in places where prostitution is legal, because paying for sex is not in keeping with the values ​​and mission of the aid organization.

Since 2015, 21 employees have not adhered to the code. They have been dismissed or have themselves resigned during the investigation into their behavior. The contract was not extended for two other employees; they were suspected of paying for sex.

'With this behavior we deny the people we want to help. It goes against human dignity. We should have been more vigilant to prevent this, 'said Yves Daccord, Director General of the ICRC in a reaction.