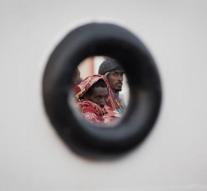 - Emergency services have sat more than 2,200 boat people picked from the Mediterranean. In the water bodies were recovered from another ten migrants trying to reach the European mainland, reports the Italian Coast Guard.

A day earlier made the International Organization for Migration announced that a record number of migrants killed this year in the Mediterranean. Up to now, more than 4220 people died from drowning or exhaustion. In 2015, the total death toll stood at 3770.