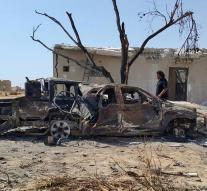 - In a car bomb attack in the Libyan city of Benghazi on Tuesday are at least 22 deaths.

The attack has not been claimed yet. Nor is it clear which party against this attack was directed.

Terror Group IS (Islamic State) in recent months was clearly foothold in Libya. The militants in the country are not nearly as dominant as in parts of Iraq and Syria, but the fighters can gratefully take advantage of the chaos in which Libya finds.