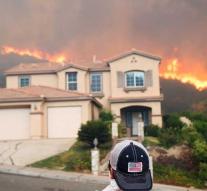 london - Hundreds of firefighters are fighting in California against a fire that threatens thousands of homes south-east of Los Angeles. As a precaution, approximately 21,000 people were evacuated in and around Lake Elsinore.

A spokesperson for the fire brigade said that the fire is difficult to combat because it rages in part on slopes covered with dry bushes. In addition, the fire was fueled by the strong wind in the night of Thursday.

The fire broke out on Tuesday and has now destroyed 7200 hectares of land. A 51-year-old man has been arrested on suspicion of lighting the fire. According to a commander at the volunteer fire brigade, the suspect had sent him a message two weeks ago with the text: 'this place will be lit,' says CNN.