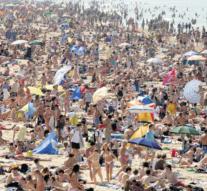 washington - The year 2016 has exceeded 2015 as the hottest year ever. Cause is global warming, while greenhouse gases have reached new heights, according to a report from the US government.

The National Oceanic and Atmospheric Administration (NOAA) report, a federal government agency, also mentions the strong El Nino cycle as an important factor behind the new global warming record year since the measurements began 137 years ago. This phenomenon causes warming of seawater along the equator in the eastern Pacific Ocean. This has effects for the weather in many parts of the world.