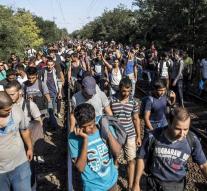 
April was the worst month. Then drowned nearly 1250 migrants. Certainly 800 of them were killed when their overcrowded boat sank off the coast of Libya.
Worldwide deceased 5350 refugees, most so in the Mediterranean. In Southeast Asia, at least 800 migrants died in Mexico and the Mexican-American border certainly 330.
NEW