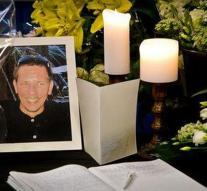 - The 20,000 euros for the family of the extinguished court judge Richard Nieuwenhuizen is just on the account of SC Buitenboys football club. That says former chairman Rob Mueller against Omroep Flevoland. He claims that the money from the benefit contest is gone.

Current chairman of the club, Richard Langeveld, said that nowhere on paper is the amount of money the family still gets. According to him, Mueller would have made the promises while the money was no longer there.

Everything would have gone up to the stadium's rental, sponsorship boards and security. When the benefit contest was held in 2013, Mueller was a secretary at SC Buitenboys.

'Of course, what the current administration has done with the money is not known,' Mueller writes in a statement. He regards Langeveld's statements as serious reproach and defamation. He is considering legal steps.

Richard Nieuwenhuizen was abducted by SC Buitenboys at the end of 2012 during an amateur game against Nieuw Sloten, and later died of his injuries. A father and a few players from a visiting club were sentenced for slaughter and / or overt violence.

According to Mueller, in 2015, 20,000 euros were paid to the family retrieved by the benefit contest. The same amount would be paid when two sons of Nieuwenhuizen would go home. But when that money was recently claimed, Buitenboys refused to pay. The family has attended Yehudi Moszkowicz attorney to get the 20,000 euros yet.