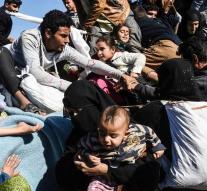 - Since the attack on Mosul began two weeks ago to retake the city on Islamic State are about 20,700 people were displaced, including 9700 children. This has Pernille Ironside, head of field organization UNICEF in Iraq, announced Thursday after a visit to the screening center in Nargizlia.

There is the communication of emergency aid, food and drink for example, and checked the health of the refugees. Young children are vaccinated against polio and measles. Then they go to a camp nearby.

UNICEF provides support to local authorities for sanitation, food and medical care. Also helping people who remain in the villages where IS has already been expelled.