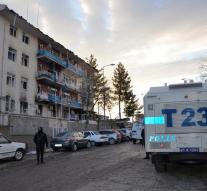 - Turkey has more than 20,000 people arrested on suspicion of involvement in the failed coup last month. A further those arrests is still unclear whether they will be considered formally accused Prime Minister Binali Yildirim made the Turkish Wednesday. A small 8000 potential stakeholders are not picked up, but there is an investigation against them.

After the failed coup are not only made thousands of arrests, but were nearly 80 000 civil servants, members of the judiciary and the military suspended or dismissed. More than 4,000 companies and organizations with ties to the Islamic cleric Fethullah Gulen have closed their doors. Turkey holds Gülen for the brains behind the coup attempt.

The government in Ankara made earlier in the day known 38. 000 inmates conditional release. Thus the government hopes to make more cell space for detainees they suspect of involvement in the coup.