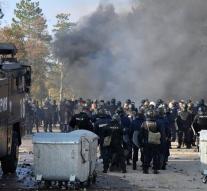 - Police have more than 200 people arrested during an uprising in the largest refugee camp in Bulgaria, where 3,000 people live. When the action of water cannons were deployed and were shot with rubber bullets to restore calm. There were 14 officers injured. Whether any refugees have been injured is not yet known.

The police took action after cease fire Thursday refugees in furniture and tires and threw stones at the police. The police were there to prevent the refugees to leave the camp. The camp was closed two days ago in Harmanli (near the Turkish border) after local media reported that a virus had broken out among the mainly Afghan residents.

Because of the seriousness of the situation, the Prime Minister of Bulgaria Boiko Borisov, on the way to the camp.

Thursday night there was also briefly a rebellion in a Greek refugee camp on the island of Lesbos, after a fire in which a 66-year-old woman and a 6-year-old child died and two people were injured. Greek police the peace was restored there soon.