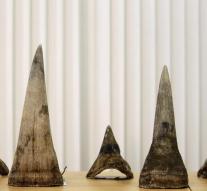 - Four Chinese men have been in Tanzania sentenced to 20 years in prison for smuggling of rhino horns. The men, between 29 and 34 years, would have smuggled the horns from neighboring Malawi to Tanzania.


The Government of Tanzania shall present crackdown on poaching and smuggling of protected animals. The East African country is largely dependent on income from tourists who book safaris.
The Chinese deny that they have anything to do with the smuggling.
NEW