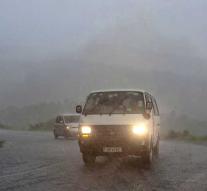 beira/harare - A whirlwind in southern Africa has caused around 20 deaths and enormous damage. In Mozambique on the southeast coast of the continent, the whirlwind Idai went Friday with…

The storm has moved further inland where about a hundred people are missing in neighboring Zimbabwe.

The damage is considerable, especially in and around the port city of Beira in Mozambique, a city of half a million inhabitants. Idai is the heaviest whirlwind that has hit the region in more than ten years.