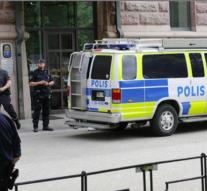 karlstad - During the rock festival 'Putte i Parken 'in the Swedish Karlstad more than twenty girls between the ages of 12 and 18 assaulted by a group of men. Despite the presence of police, the men could go about their business.

According to the media Russia Today would be a massive assault that left compare with the molestation of dozens of women in Cologne during new years of the beginning of this year.

The young women told police that attempts were made to kiss them while they were seized at their breasts and buttocks. The attacks took place at busy times of the stage during performances. According to police, it would be a group of seven or eight men. Two boys were identified by the girls, they are aged 16 or 17 years.


Migrants are increasingly accused of sexual offenses in Sweden, where groups of men and boys have attacked girls aged 12 to 17 years. That happened in the last two summers in the Stockholm music. In a leaked memo from the Swedish police, security services noted that 'unaccompanied youth' in the Middle East were behind the crimes.