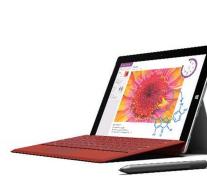 london - More and more Europeans are buying a 2-in-1 laptop. That is a laptop from which the screen can be unclipped, so that it also can be used as a tablet. Sales in the second quarter was three times higher than in the same period last year, from half a million to 1.6 million copies.

According to figures from research firm IDC. The Microsoft Surface Pro and the iPad are the most popular 'detachables. Sales of tablets like the iPad, dropped by 6 percent. Also PCs were sold fewer.