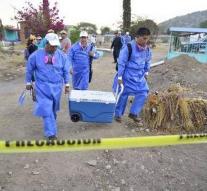 mazatlan - In Mexico, 19 people were killed on Friday night (local time). There are two related shootings.

At the first shooting party in the state of Sinaloa, two people joined. The police followed the suspects, after which it came to a firefight at the port city of Mazatlan. 17 gang members were killed, five police officers were injured. Several weapons were seized.

In the region where the Sinaloa cartel swings, the drug violence raises this year. Drug baron Joaquin Guzmán, better known as El Chapo, was delivered to the United States in January. Since then, different parties have been fighting for power.