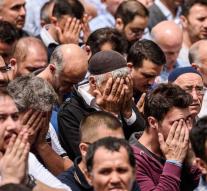 - The number of foreigners killed by the attack on the Ataturk Airport in Istanbul is higher than previously known. According to the Turkish Interior Minister Bevel Ala Nineteen foreigners killed, reported state news agency Anadolou Thursday.

Earlier, the government had spoken of thirteen foreign victims. Ala further said that the death toll has risen to 43. The bombing came three suicide terrorists. Nearly 240 people were injured.