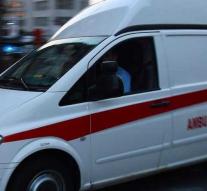 wasmes - Nineteen cyclists were injured on Sunday by a strange maneuver of a motorist during a provincial race in Wallonia. The accident happened because the woman suddenly turned around on the course in Wasmes, a district of Colfontaine, and rode on the platoon. A driver was hit, several pursuers fell over him.

Three riders, one Fleming, one Dutchman and one German, open broken fractures, four others a concussion. The other victims came away with especially abrasions. There was quick medical help on the spot. The wounded have been taken to hospitals in Warquignies and Bergen, among others.

According to the mayor of Colfontaine, the organization of the cycling race had taken sufficient safety measures and the accident was 'pure coincidence. 'It took place at 3 kilometers from the finish in a steep street where the riders developed a high speed in the descent.