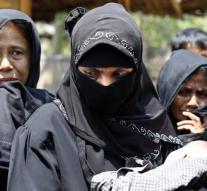 cox's bazar - About 18,000 Rohingya fled from Myanmar to Bangladesh last week, says the International Organization for Migration (IOM). The Rohingya, an ethnic Muslim group, tries to escape the worst violence in northwestern Myanmar in the last five years.

A series of coordinated attacks on Friday by Rohingya insurgents on security forces in the state of Rakhine in northern Myanmar and subsequent clashes caused the exodus.

The IOM said it's hard to estimate how many people are stranded in a piece of no-man's land at the border between both countries, but added that 'hundreds of' refugees are definitely stuck there.

Great Britain has asked for a Security Council emergency session on Wednesday about escalating violence between the Rohingya and security forces in Myanmar.