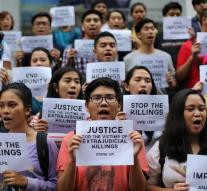 - In two months on the Philippines more than 1,800 deaths as a result of President Rodrigo Dutertes 'war on drugs'. The new president, who since June 30 is the boss in the country, promised during his election campaign if he would tackle the drug problem. He called on citizens to shoot drug dealers dead and resisting arrest.

Among the dead were 712 drug dealer. In the other deceased involves,, drug-related incidents '', says the head of the national police.

The figures come a day after President Duterte had threatened to withdraw from the United Nations. He would like to form a new organization together with China and other countries. Duterte responded to the call of the UN to put an end to the bloody crackdown on drug crime in the Southeast Asian country.