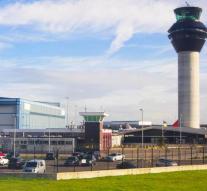 london - The man who tried to smuggle a pipe bomb aboard a plane at Manchester airport was sentenced to eighteen years in prison on Wednesday. The judge considered him guilty of possession of explosives with the intention of endangering lives.

43-year-old Nadeem Muhammad wanted to check in on a flight from Ryanair to Italy on January 30 when security officers discovered a bomb in his hand luggage. The explosive was clogged in the locked sleeve of a marker and was designed to be detonated by hand.

Muhammad told the police that one of his children, whose oldest eleven, must have done the explosive pen in his bag. The prosecutor said the suspect planned to blow up Ryanair's airplane.