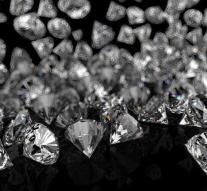 brussels - The Brussels District Court acquitted eighteen of the nineteen suspects of the diamond robbery at Zaventem airport in early 2013 because of lack of evidence. In the robbery, the perpetrators took out 37 million euros worth of diamonds from a plane belonging to a Swiss airline.

The case against the suspected prime suspect, Marc Bertoldi, is being dealt with at a later date. He is in a French cell for a kidnapping and can not be transferred to Belgium. It went on for another fifteen men and three women.

At least eight armed and masked men entered the airport with a van on February 18, 2013 and drove up to the plane. Within a few minutes the perpetrators had disappeared with their booty.

The Public Prosecution had demanded jail sentences of one to eight years against the nineteen, while the defense demanded acquittal. According to the Public Prosecutor, eighteen persons were members of a criminal organization.