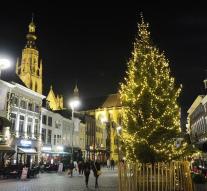 - About 1.8 million Dutch go this year during the Christmas break away. That number is the same as last year, reports Dutch Board of Tourism and Conventions (NBTC) Tuesday.

Half, about 900,000 people, looking for a vacation spot in abroad. Compared to last year, that 50 000 fewer. Germany is the most popular. About 30 percent goes to our eastern neighbors. Belgium, France and Austria are also doing well.The other vacationers remain in the Netherlands. Half of them opt for a holiday in a bungalow. A quarter celebrates the holiday in a hotel.This year the Christmas holidays in the country from December 19th to January 3rd.
NEW