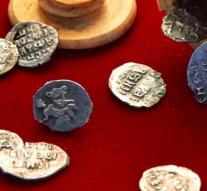 moscow - In Moscow, a nearly 500 year old chess piece filled with silver coins was found during roadworks. The rare object dates from the 16th century, The Moscow Times reported Wednesday.

The horse-shaped carved statue was excavated during work on gas pipes of the city in Prechistenka Street. Archaeologists discovered that the chess piece was hollow and that there were ten silver coins.

According to experts, the coins were struck between 1530 and 1540 when Ivan was the Terrible about Russia. The coins would have had a considerable value, which enabled the then owner to buy at least ten geese, according to the department of cultural heritage in Moscow. Also in the remaining 31 pieces coins could have been stopped, but those pieces have not been found so far.

During the work on the gas pipes, more than 150 historical artefacts have been excavated. Among the findings was also an underground spy room in the center of Moscow from the 16th century.