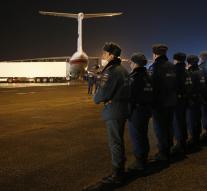 - The first victims of the plane crash in Egypt Sunday from Cairo to Russia flown. The 162 bodies were brought to St. Petersburg. There, the victims will be investigated further and identified.

The Airbus A321 of the Russian charter company kogalymavia disappeared Saturday morning the radar above the Sinai desert. It was on his way to St. Petersburg from the resort of Sharm al- Sheikh. All 224 passengers were killed. Thousands of people spent Sunday night in St. Petersburg a tribute to the victims.