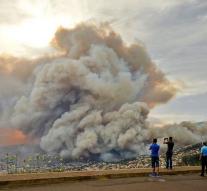 funchal - The fires on the island of Madeira leave a trail of destruction behind. So far 150 houses burned down, including in the capital Funchal, the government announced on Thursday. On the island raging through the heat (37 degrees) and dry several fires, which have already cost four lives.

About four hundred inhabitants of Funchal had to spend the night again in an army barracks. Three hundred tourists, the first night were still housed in the football stadium of Maritimo, have been accommodated in hotels outside the danger zone. The fire department has struggled to extinguish the fire. Because of the strong winds and smoke nuisance firefighting aircraft can not be used.


A 23-year-old is suspected of arson at one of the fires. He was arrested. The Funchal-born Portuguese football player Cristiano Ronaldo, has indicated that he wants to give money to the island for repair. How much money is going is not known.