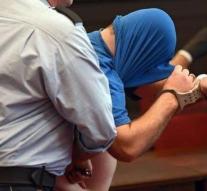 bonn - A father in Germany who threw three children out the window of a house on the first floor, was Thursday sentenced by a court in Bonn to fifteen years in prison. There was life sentence for him.

The court found the 35-year-old asylum seeker from Syria guilty of triple attempted murder. The children survived, but were seriously injured.

The man swung his offspring in place Lohmar out because he wanted to punish his wife. Who had threatened to step the police if he continued to mistreat her. According to the prosecutor, the man had the children 'like an old tree' thrown out the window.

According to the defense, which argued for a much shorter prison sentence, the man came from poor groups in Syria, where violence was the order of the day. After his flight to Germany, he could not deal with the other manners.