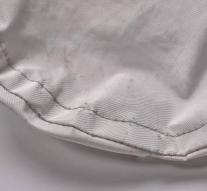 new york - A bag of trace of lime dust on Thursday auctioned at Sotheby's in New York 1.5 million euros, less than the 1.7 to 3.4 million euros predicted. Neil Armstrong used the 30 by 21 centimeter bag to collect dust after the first manned landing on the moon in 1969 for further investigation on earth.

A Chicago woman offered the dust bag for sale. She bought it for less than $ 1000 in an auction of government supplies in 2015 and left him authenticated by NASA. The space agency recognized the bag and tried to get back in vain, because it belonged to the American people. '

According to NASA, he was accidentally sentenced to the wrecked items, but a judge decided in December that the woman had obtained the item lawfully. Who is the buyer of the dust bag, has not been announced.