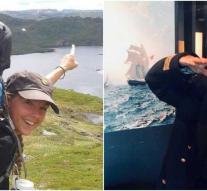 rabat - Fifteen people have been charged with the murder of two young Scandinavian tourists in Morocco. Prosecutors say the fifteen are accused of terrorist activities and...

At least four of the suspects belonged to a group that was inspired by Islamic State, but never had contact with the terrorist movement in Iraq and Syria, news channel Sky reports.

The Danish Louisa Vesterager Jespersen (24) and the Norwegian Maren Ueland (28) were found beheaded earlier this month.