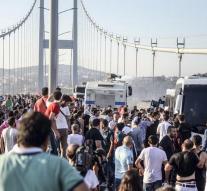 ankara - When the failed coup attempt in Turkey earlier this month were involved 8651 troops. Reported that the Turkish army Wednesday. According to sources in the army was about 1.5 percent of the total army.

When the coup would have used 35 aircraft of the Army, including 24 combat aircraft. The coup plotters were 37 helicopters, 37 using tanks and 246 armored military jeeps. In attempting to overthrow the regime of President Erdogan, 246 people died. More than 2,000 people were injured.