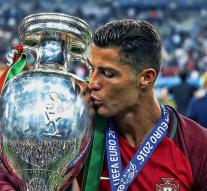 - Approximately 13.4 million people have 'something' seen (at least five consecutive minutes) of the European Football Championships or the programs around it. The most-watched match was the final between Portugal and France on Sunday (4.2 million). The NOS the audience called surprising because it lacked Dutch team. The 2014 World Cup in Brazil- with Orange- drew 15 million viewers.

Six in ten TV viewers had Sunday turned the final.