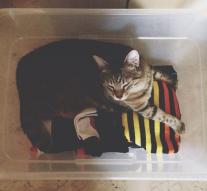 paris - The police in Paris found 130 cats in an apartment of almost 25 square meters. The police went to the apartment of a sixty-year-old woman on the third floor in the Montparnasse district after a phone call from a worried resident.

He called the police after he saw how the woman hit a small cat from the window sill. In her house, the police discovered the vast number of cats in a totally polluted area on Sunday. There were cadavers of deceased animals and many of the cats were malnourished.

The woman was arrested. The animals are housed in a shelter. Employees needed four days to catch all animals, according to French media.