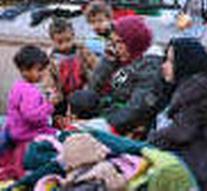 - Bulgarian border guards Saturday than 129 refugees have been discovered in a refrigerator truck who tried to enter the country from Turkey. The Ministry of Interior of Bulgaria was nothing known about their health status, but noted that there were 58 children among the migrants.

The Turkish driver of the truck was arrested. He tried to get the refugees from Bulgaria to Romania, but so was already detained at the Bulgarian- Turkish border. The refugees who were hiding behind pallets of mineral water, had no papers on him. However, they said to come from Syria. The Bulgarian authorities now see if that's right.

For large-scale inspections Bulgarian authorities on Friday discovered 495 illegal refugees. They have been arrested.