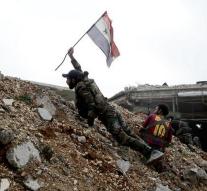 moscow - According to the Russian 1200 Syrian rebels Ministry of Defence have been surrendered in the fighting in Aleppo and laid down their weapons. The department came Saturday with the figures. In addition, it was also reported that about 20,000 residents Saturday left the besieged city.