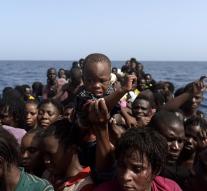 - SHOCKING PHOTO- In the last 48 hours are about 11,000 refugees from the Mediterranean saved from the coast of Libya, the highest number ever. Among them, a few dozen survived the crossing. In the hold of an overcrowded wooden fishing boat the bodies of some 20 people were found, which probably suffocated.

In a rubber boat some 28 bodies were found, possibly to be killed by trampling and oppression. The Italian navy has in the past two days, 33 boats used the crossing, including 27 large rubber boats.

The wooden fishing boat had more than 1,000 people on board. Shortly after the rescue were born on one of the rescue ships three babies.

Now the weather is calm, send smugglers one after another rubber boat on the sea, in the expectation that a fleet of rescue ships rescue them as soon as possible if they are outside the territorial waters. The refugees are put ashore in Italy.