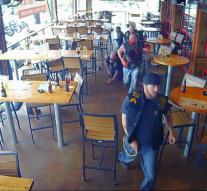 waco - A jury court in the United States on Tuesday, 106 members of motorcycle gangs charged in connection with a massacre in May at a restaurant in the US city of Waco. The gang members are accused of involvement in " organized criminal activities, including aggravated assault and murder," reported CNN.

Nine people were killed when at the restaurant Twin Peaks two motorcycle gangs opened fire on each other. Eighteen others were injured. Police have arrested 177 gang members, of which there are now 106 have been indicted. The jury should appear at a later time or the other 71 to the court.

The police after the firefight 480 weapons, including 151 firearms seized. The owner of Twin Peaks was previously sued by the owner of a restaurant opposite. That restaurant was hit by bullets and would damage a million dollars.