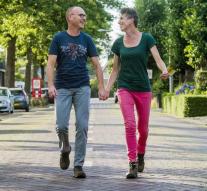 - Nearly 1,300 walkers from opening all the provinces of the Netherlands on Sunday Waalbridge officially the hundredth edition of the biggest walking event in the world, the Marches.

Accompanied by military bands runners wearing their county flags and flags of the 68 participating nationalities to Wedren, where the marches start and finish each day.

The Flag Parade is one of the many extra activities for the centenary of the originating military performance ride. Do more walkers than ever with (48. 896) and around Nijmegen has never been so much music and celebration. Alone in Nijmegen's city center, hundreds of artists on 38 stages. Despite the attack in Nice last Thursday everything go so far as usual.


,, We take many years into consideration the threat level in the Netherlands. Before that plans are ready. Security and police monitors the mass constant. We hope everyone is itself alert to suspicious situations. There is no indication that during the marches something would happen, '' says the city and the organization of march and celebrations.

Tuesday morning at 04. 00 hours the runners on the 50 or 55 kilometers from the starting blocks. They are not the first Four Days Marches walkers this year, since Monday night have already started 25 walkers for an extra round of 50 kilometers. Every day, some 25 hikers 'lap of honor' and explain that day over 100 kilometers.

Hikers and 1.5 million revelers in the town are popular with scientists. For example, researchers posts in the toilet cubicles on the trail. They want to know if there are spread through the toilets and diseases or associated with washing hands. In the city center are 275 mobile toilets. As urine is collected to reuse it as a fertilizer. Men who nevertheless should look urinate against a wall covered in secret locations are walls with a coating that ensures that the urine back splashes against urinating on.


The Mulier Institute of Sport Science, together with the Radboud University studied the phenomenon Marches. The survey shows that 12.6 million adult Dutch know the Marches, and that 7.5 million people know someone who has walked once. Nearly all respondents (93 percent) boast the warmth and cordiality of the event,, at a time with a lot of aggression. '' More than 80 percent believe that the Netherlands can be proud of the Marches.