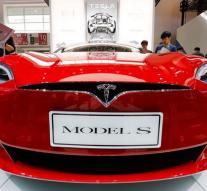 - The Netherlands has since Wednesday 100,000 electric cars and motorcycles. The number of hybrid and fully electric vehicles takes a big flight, an increase of over 10 percent, made the Ministry of Economic Affairs on Wednesday with last year.

Of electric vehicles, there are about 12 000 fully electric. The rest has both an electric as well as a motor fuel. The most popular hybrid car is still the Mitsubishi Outlander. Of the cars that all electric vehicles, the Tesla S favorite. There are now more than 25 000 publicly accessible charging points.

According to the Ministry of Economic Affairs, the Netherlands is one of these numbers among the top five in the world. Employment in the sector rose in 2014 by a quarter, until 3200 full-time jobs.

According to Minister Henk Kamp of Economy figures show 'that it goes well with the electric transport in the Netherlands. 'The government, companies and organizations are now strong for the construction of even more more charging stations, the minister said. From 2020, the electric car so attractive that the current tax benefits may be reduced, says Camp.

The government sees little in expanding financial support to buyers. Hence its high costs involved and the expected according to the Cabinet that the effect on new buyers will be limited.