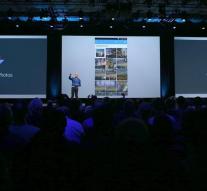 - It went fast with the online photo service Google. Google Photos was announced in late May and already has more than 100 million people who use it at least once a month. Has announced that the internet giant.

To celebrate this joyous occasion, Google also announced some other facts about service. Most photos of people be so, but food is at number two on the list of favorite topics. Apparently people more proud of their cars, because they are at number three on this list.

It is also striking that more photos are taken of dogs than cats, and that Paris is the most popular location, followed by New York and Barcelona.

While using the service is the most searched for ' baby ', indicating that users especially baby pictures retrieval. But "I" is a popular search term and  selfie.

Finally, let Google know that there are already 15 million animated pictures and collages are made. That's Google Photos to create a relatively simple by selecting the snaps the rest by having the service zelg do.