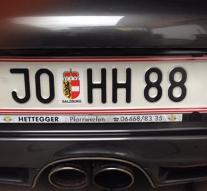 vienna - A 44-year-old man who runs in Austria with a Heil Hitler license plate, risks a cell sentence of up to 10 years.

And by wishing that combination, he identifies himself as a national socialist, for example, the judiciary who draws him to court in Salzburg today. What definitely does not help is that the German regularly forwarded online Hitler pictures.

Another Austrian did after threats requested registration with HH 88 in 2008. Hannes Hettegger a son in 1988, said not to have realized that he was mistaken for Nazi.

Since 2015 new license plates with reference to Nazi codes have been banned in Austria.